I grew up with Corgi’s! My Grandparents being true English people loved the Queens Corgi’s so they were my first experience with dogs. My Mum is a real dog lover too so we used to take in all waifs and strays and help them as best we could. Helping others is in my blood, especially those who can’t speak for themselves.

My first experience with Rottweilers was when our neighbours Rottie had pups and couldn’t nurse them. I ended up with my first Rottie X, Jessie a 4 week old pup I nursed. While flatting my flatmate had the most gorgeous Rottweiler Cytan and by then I was hooked! After my big OE and years spent in the UK I knew I wanted another dog and I ended up with one of the most abused dogs I had ever come across. Tyra’s coat was grey, she had chunks missing out of one side after she “jumped” from a moving vehicle cigarette burns on her head and ears so alive with mites they moved on their own. Raise an arm to scratch your head and she would cower and wet herself. Years of rehab and two TPLO crutiate surgeries later she was an amazing dog ever. She had her issues though, no dog parks due to the fact she had had to fight another dog for her share of food, but on her own terms she made a few amazing friends like our rescue Border Collie Dylan and Rottweiler Zeus.

I have worked with dogs for as long as I can remember and Rottweilers in particular for over 25yrs. Now I have Bella, brought in weighing under 18kg, parvovirus and giardia poisoning. Now a healthy 38kg, she is the dog that brings the rescues out of their shells or calms them down. She teaches them things only another dog can. I have always been an animal lover and grew up with a gorgeous Cocker Spaniel and a variety of other small animals – mainly hamsters (I’m English!).

I moved to New Zealand in 2004 after meeting my husband in the UK.  This was when I had my first proper interaction with a Rottweiler.  My husband had left his Rotti “Turock” with his mother while he did his OE and on returning, we went to stay with her for a while.  When I first saw Turock, I have to say, I was pretty wary.  I’d never met a Rottweiler up close before and he was HUGE!  However, I was soon won over by his beautiful, outgoing nature and this is where my love of the breed began.

Turock was happily settled with Grandma on her rural property, so once we had found jobs and bought a house, my hubby and I started looking for our new Rotti pup.  We contacted Turocks breeder and she just happened to have a litter on the ground.  We got Jackson, a gorgeous little bundle with a big character and an even bigger attitude!

I have been working as an Animal Control Officer in Wellington City since 2005 and I love my job. I deal with the adoptions and have rehomed numerous dogs, including more than a few Rottweilers, often collecting them from other pounds where they found themselves unclaimed/abandoned.  Jackson has been crucial in helping me out with these rehomes and is great at teaching new dogs the ropes.  Around 2015, we collected an older Rotti girl from a nearby pound after her owners didn’t claim her.  We fostered her for a while, then we found out she had cancer.  We decided we couldn’t let her go, so “Maggie” joined our little pack.  She turned out to be an amazing dog who I can honestly say was 100% sound with everything and everyone.  She adored children and was another great dog to have around to help teach new dogs how to behave.  She was with us for another 18 months and was an absolute sweetheart.

It was through my work that I met Tracey, who founded RRRNZ.  It was so nice to meet someone else who was as passionate as I was about helping this beautiful, yet often misunderstood breed.  She asked if I wanted to be part of the RRRNZ team……how could I refuse? 🙂 I was lucky enough to grow up with dogs, first with a rather long legged Cocker Spaniel and then a lovely Gordon Setter cross German Shepard we got at the local SPCA.

My Husband also grew up with big dogs. His parents introduced us to Rotties, when they rescued 2 lovely dogs, a boy and a girl. The girl especially stole my heart, she was a gorgeous snuggly gal, who despite a really rough start, was just a pleasure to have around!

When we moved to NZ and finally bought a house, we were thrilled that this meant that we could at long last get a dog of our own to join our family and agreed that we would get a Rottie. Our beautiful Loki joined us just a few weeks after we moved in.

When I took Loki for puppy training, I met the then secretary of the Rottweiler Club and my interest in the breed quickly got me co-opted on to the Committee where I met Tracey.

Tracey’s huge engagement and enthusiasm for the breed and in particular for Rescue was infectious. And the rest, as they say, is history! For the first 12 years of my life for every birthday and Christmas I asked for a puppy. Finally I woke up on Christmas morning to find Ebony, the best cocker spaniel friend a girl could have. Fast forward a couple of decades of small dogs and cats and then I was a ‘grown up’ and settled down enough to get the dog I had always wanted – a Rottweiler!
Skater is everything I could ever have hoped for. I helped her through 2 cruciate repair surgeries and she helped me through losing my parents.
People say they wish dogs could talk, I reckon it’s more important that humans learn to listen! Kim with first pup and now with Skater 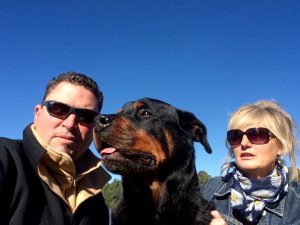 Name: Chief Age: approx 3 years old Gender: Male Tail: Docked Medical: I will be desexed, vaccinated, microchipped and registered. Location: Auckland Restrictions: No cats Bio: Chief here, my foster humans are busy, so I figured I’d take care of my own bio! Things have been fun around here & alpha female aka ‘bonus foster-mum’ is … Read more

Holly all year round Name: Holly Age: approx 8 years old Gender: Female Tail: Docked Medical: I will be desexed, vaccinated, microchipped and registered. Location: Timaru Restrictions: No cats, No livestock Bio: Hi, know it’s nearly Christmas so don’t be confused – my name is Holly all year round. I am about nine so the world … Read more

Miss Bear Name: Miss Bear Age: 4.5 years Gender: Female Bio: Meet Miss Bear! Bear may be small in height but she is gorgeous and well built! She is a very sweet girl who knows her own mind but loves a good cuddle too (and kisses–don’t forget the kisses). While we don’t know much about ... Read more
Little Abbie Name: Abbie Age: 3 years old Gender: Female Bio: This poor girl has been thrown from pillar to post a bit. Originally bought to be a companion dog in a rest home however she was too full of beans. The next owner got her for breeding (she’s had one litter) however as she ... Read more