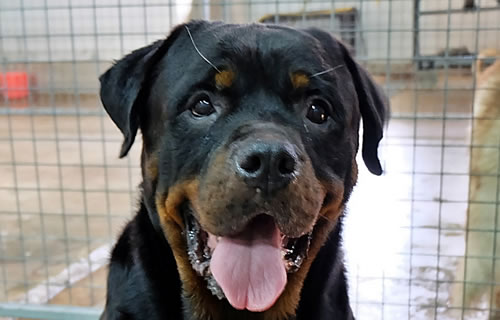 We have so many wonderful dogs come through and each and every one of them has their own special story!

However every now and again there are a few special ones that really touch touch your heart! Read their stories here!

Rangi’s story is a special one! Thank you to everyone who donated to help save him–he belongs to each and every one of you!

This gorgeous 9yr old Rottweiler Rangi needed our help! We were contacted by SOSD Rescue in Singapore to help rehome this beautiful boy. Initially I said no as we are a NZ based rescue and don’t do international. However when I heard his story and that poor Rangi has been waiting a year and no-one would adopt him we had to help.

Here’s a bit about Rangi and why he is so hard to rehome!

Rangi started his life as a show dog originally imported from Serbia and when you see him you’ll understand why. This gorgeous Rottie is a gentle giant and an absolute sweetheart. His current home is a renowned Singapore dog shelter where Rangi has stolen the hearts of all the volunteers with his gentle demeanor and stunning looks.

Unfortunately, Singapore has specific laws for certain breeds and has made it a lot trickier to get them adopted, and that includes the Rottweiler. New owners in Singapore need to take out special insurance, go for obedience training as well as keep the dog muzzled at all times while out in public. These special conditions as well as the size of Rangi has kept him from finding a new home after his previous owner had to give him up.

A while back Rangi caught the attention of a Singapore expat; a passionate Rottie lover who grew up with these beautiful dogs around her. She instantly felt compelled to do something to get Rangi a normal life, with a family and without enclosures. Even though she was unable to take him herself, she was determined to get him in to the loving family and environment that he deserves.

Seeing the issues in Singapore, she contacted an organization in New Zealand called Rottweiler Rescue & Rehoming New Zealand (RRRNZ) where Rangi would have a great chance to find his new forever-home. The response was very positive and we are now in the process of getting him over to New Zealand to ensure his last years on this planet will be more than an enclosure and very limited human interaction.

Name: Chief Age: approx 3 years old Gender: Male Tail: Docked Medical: I will be desexed, vaccinated, microchipped and registered. Location: Auckland Restrictions: No cats Bio: Chief here, my foster humans are busy, so I figured I’d take care of my own bio! Things have been fun around here & alpha female aka ‘bonus foster-mum’ is … Read more

Holly all year round Name: Holly Age: approx 8 years old Gender: Female Tail: Docked Medical: I will be desexed, vaccinated, microchipped and registered. Location: Timaru Restrictions: No cats, No livestock Bio: Hi, know it’s nearly Christmas so don’t be confused – my name is Holly all year round. I am about nine so the world … Read more

Miss Bear Name: Miss Bear Age: 4.5 years Gender: Female Bio: Meet Miss Bear! Bear may be small in height but she is gorgeous and well built! She is a very sweet girl who knows her own mind but loves a good cuddle too (and kisses–don’t forget the kisses). While we don’t know much about ... Read more
Little Abbie Name: Abbie Age: 3 years old Gender: Female Bio: This poor girl has been thrown from pillar to post a bit. Originally bought to be a companion dog in a rest home however she was too full of beans. The next owner got her for breeding (she’s had one litter) however as she ... Read more